Leadership Communications: One Equals the Other 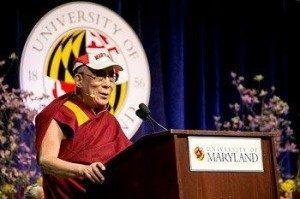 Good leaders have vision.  Great leaders have vision and the masterful the ability to communicate it, thus captivating others to embrace and support it.   Nowhere was the intersection of leadership and communications more evident than in the remarks by His Holiness the 14th Dalai Lama when he spoke at the Anwar Sadat Lecture for Peace at the University of Maryland.

Without saying a word, he telegraphed his message of compassion, love, and peace immediately.  Stepping onto the stage in his maroon and gold robe, he smiled broadly as he sported a University of Maryland visor.  The crowd responded with wild applause and was immediately engaged.  With a gesture and smile, he immediately communicated that he was one with the crowd and radiated warmth and happiness. When he began to speak his message, the audience not only could hear it but feel it.

The Dalai Lama is a spiritual leader of the Tibetan people, but the influence of this Nobel Peace Prize laureate has spread worldwide because of an ability to communicate effectively with the moral authority of both his presence and his words.  His words are simple and forthright—his ideas rich and complex.  I have heard others speak about the same things, but none of them moved or inspired me as the Dalai Lama did.

After he was exiled from his native land, the Dalai Lama could have lived a closeted life in India.  Instead, he chose a path of openness to other cultures, a dedication to ideas and of learning, and most importantly a devoted willingness to share his insights and spirituality with others. He is a great leader because he is a great communicator and someone we should all try to emulate.

The Dalai Lama and Leadership Communications:

Do you have an example of a leader who is a great communicator?