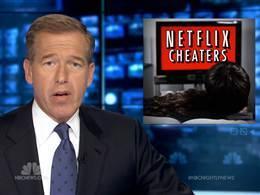 Netflix this week rolled out a brilliant commercial campaign with wow-worthy framing of messages.  It’s a story framed as news so topical and irresistible that Brian Williams dedicated an entire story to it on NBC Nightly News (remarkably airing on a network owned by Netflix’s oh-so-threatened competitor Comcast).

Here’s the way it played on NBC’s web pages:

“There is a sacred vow between partners who watch television together: Thou shalt not cheat.

That means no sneaking around with a tablet to watch the latest installment of “Mad Men” or “Homeland” while the other person is asleep. Skipping ahead one episode is bad enough, but the ultimate sin is to binge-watch a series and lie about it to your sweetheart.

For a cheater, though, sometimes it’s impossible to resist the urge of wanting to know what happens next.

While anecdotes of this kind of infidelity have trickled out of households all across America, Netflix has finally measured the trend. The company recently surveyed 2,068 adult Netflix users online and found that 12 percent confessed to ‘stream cheating’ while 10 percent said they had been cheated on.

If you and your partner haven’t snuck around on each other yet, it’s likely that you’ve at least thought about it. The survey revealed that 51 percent of respondents said they would stream a program alone even after having promised to watch it together.

Many cheaters — 41 percent — have the decency not to spoil a scene for their partner. But only 14 percent would feel guilty enough to tell the truth, while 12 percent would re-watch a show and ‘fake it’ as if it were their first time.”

Yes, one of the smartest parts of this campaign is its survey aspect that poses the story as news, even while it’s accompanied by commercials to match.  (And as a former journalist, I have to say, this rankles more than a little.)  But what’s truly brilliant is how Netflix went about framing messages—which is that their programming options are so irresistible, they rank right up there on the temptations list with chocolate and oh, say, marital infidelity.

Add this to my list of campaigns I wished I’d come up with.