Branding: Do You Have the Shtickiness Factor? 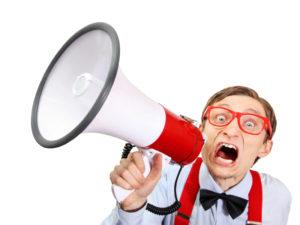 How many times have you read an article or seen someone appear on television who is referred to as the leading expert in your industry or field and thought, “it just ain’t so?”  Many times, these aren’t the smartest, most skilled, or most talented folks, but they are people who have what I call the “shtickiness factor,” a clever gimmick, a turn of phrase, a memorable “shtick” that helps them in branding themselves and standing out from the crowd.

In today’s thriving marketplace of ideas and products, getting noticed is getting harder and harder. Everyone likes to think that their company or nonprofit is unique.  The reality is that few of us really are. But those who manage to claw out of the clutter have found their inner shtickiness and flaunt it—over and over again.

“Shtick” is derived from the Yiddish word for “piece” but came into popular parlance in the U.S. when it was used to describe the work of comics.  Their shtick was their signature mannerisms or phrases.  Recall Rodney Dangerfield’s “I don’t get no respect” or Sasha Baron Cohen’s Ali G character, or even Bill Cosby’s signature double-take—a language in itself.  Today the word extends beyond comedy and theater to mean, as Merriam Webster’s dictionary defines it, “one’s special trait, interest, or activity.”

We’ve all heard of “sticky” messages—compelling enough to punch us in the gut and short and memorable enough to stick to our brains.  But when marketing ourselves, we also have an equally smart and clever way of presenting our work, our ideas, and our products.  Call it our shtickiness.  Shtickiness gets attention. Stickiness helps keep and grow that attention.  In the business community, just who numbers among the shticky?

From his inimitable comb-over to the way he describes his projects as not just huge but “yooge!” Donald Trump is bolder and brasher than other real estate developers, a group not generally known as shrinking violets.  Marketing guru David Meerman Scott coined “newsjacking” to describe a practice of inserting your enterprise’s perspectives into an ongoing news cycle to become part of the story. Smart PR folks did this for years; but they weren’t smart enough to come up with a catch-phrase to describe it.  And did the late Steve Jobs just like black turtlenecks?  Or did he devote his entire closet to them as one more way to draw attention to a brilliant, break-all-the-rules business model?   What more proof do we need that shticky works?  I’ve just mentioned Trump, Meerman Scott, and Jobs in this post.

So how do you find YOUR inner shtickiness?

Coin a word or catch-phrase that is associated only with you.

Economist Steven Levitt and journalist Stephen Dubner did this very successfully with the word “freakonomics” – a book title that laid the foundation for a new international brand.  The book marries economics with popular culture to raise and explore some provocative questions.  They could have called it “the economics of daily life” (yawn, yawn, yawn…) but instead dreamed up a new and exciting word.  In my world of communications consulting, Heather Lutze coined the word “findability” to help clients understand the benefits of Internet search engine optimization.  The shtickiness of findability led to a business and brand that in turn fostered a highly successful speaking career and book publishing.enterprise..

Capitalize on what’s different about your company or cause.

You know what sets you apart from the other guy. Now play to that distinction.  Take, for example, Rehoboth Beach, where there is a candy store, it seems, on every block.  But Snyder’s Candy found its shtickiness by stocking more than 80 varieties of licorice from around the world, in addition to the usual beach-town bonanza of salt water taffy and lollipops.  In education, Michelle Rhee, the former Chancellor of D.C. Public Schools stood out with her strong, even strident, approach to fixing a troubled school system.  She took on the persona of a bold reformer, even posing on the cover of Newsweek with a broom as if to clean house. Her signature bluntness and willingness to take on a fight invited unpopularity, and even enemies. Her distinctive shtickiness, however, made her a lightning rod in education reform.

Shticky people constantly promote their shtick.  They write books, they speak, they take bold and provocative positions, and they consistently remind you of their shtick. They demand to be noticed.  There are hundreds of developers every day putting together all kinds of deals for hotels and mixed use projects. But Donald Trump stands out because he’s shticky.  His signature “You’re fired!” caught fire with repetition around the water cooler.  And he has elevated an unquenchable ambition to an art form—announcing just last month that he had spent $1 million on research to determine whether he should run for president again, because “everyone” tells him he should run.  Now, that’s self-promotion.

Shtickiness isn’t only about coming up with a signature word, idea, approach, or promotion, however.  It’s an attitude and a way of being.  The race to the top these days won’t be won only by smarts and speed.  You gotta have shtickiness.