The Truth: The Most Important Business (and National) Resource 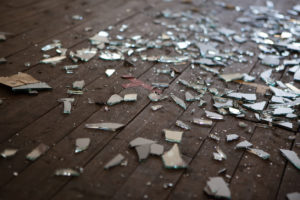 The truth is as fragile as glass.  If we aren’t careful, we can shatter it.

The truth has always been hard to come by. Those of us who work in strategic communications strive every day to help our bosses and clients figure out how to tell their truths—not always an easy task.  I was reminded about the challenge of finding the truth when, cleaning out some old files, I found the typewritten essay I wrote to become an intern at The Washington Post.  Although the paper had yellowed slightly, the essay’s words are as bright today as they were when they were written several decades ago.

The Broken Jar of Mayonnaise

The essay began by describing a dinner I attended in 1979 as a college student in the former Soviet Union.  I had casually mentioned to Marina, my host and the flat-mate of my friend Stas, that I was an American.  My revelation so shocked her that she dropped the precious jar of mayonnaise that Stas and I had spent most of the afternoon searching for (mayonnaise on that Sunday in the U.S.S.R. was a scarce commodity).

Although Stas had told her I was a foreigner, she had assumed I was Georgian or Moldavian.  That I was from the U.S. never crossed her mind.  Few Americans traveled to Russia then and it was dangerous to associate with us.  Once she got over her surprise, hardline loyalist Marina started to pepper me with questions that tumbled out of her mouth like a raging waterfall.  “Do you have car?  What kind of house do you live in?  Do you really have buildings that touch the sky? What is America like?”

During the five months I spent in Leningrad, now known as St. Petersburg, I met many people like Marina, who had never had a chance to travel beyond their own borders or connect with people from other places who have different perspectives, histories and life experiences.

Cynicism that Overshadows Everything

As I described in that long-ago essay, most Russians that I met were highly cynical and didn’t really believe everything they heard from their government, especially the rosy stories of Soviet progress.  Their experience more typically involved shortages of food and goods that Americans took for granted.  They heard rumors about people carted off to prison.  But, because at that time they did not have free access to even their own history, they had no way to confirm their suspicions or envision a larger context. Some passively accepted the answers they were given, even as they doubted their truthfulness. Others found it easier not to ask questions at all.

For one of my university courses—this one on the Soviet press—the professor was a journalist who often poked fun at the system. He told us that the function of the press is agitation, propaganda and information in that order.  When questioned further, he said that information is relevant only when it serves the government’s objectives.

The Challenge of Facing the Uncomfortable

A few years later when working as a medical social worker at a major Boston hospital, the question of truth and information hit me square in the face once again.  Terminally ill patients often were kept in the dark about their prognosis, either because doctors felt uncomfortable telling them or because their families didn’t think they should know.  But most of these patients, like the Russians, knew deep down their fate.  Many just didn’t want to face it.

And, now, in the age of social media, we live in what Eli Pariser calls the “filter bubble,” where algorithms expose us only to information and beliefs that conform to and reinforce our own beliefs.  Alternative facts masquerade as reality.  The truth is even harder to discern.

The Truth is Worth Protecting

The search for truth, for understanding and for connection is not a passive act.  As communicators, we owe it to our colleagues, bosses and clients to help them find and tell their truth. Honesty is always the best business policy, because when companies and organizations lie, it is often the lie that causes the most trouble and pain.

As individuals, we should always demand the truth from the companies with whom we do business, our organization’s managers and leaders, and the elected officials who shape the policies and programs that affect our lives. When we blindly accept without asking questions, we become vulnerable to tyranny (both corporate and political), bad behavior and unrelenting cynicism.  Without truth, we lose trust.

Even though the truth can be uncomfortable or even downright painful, it can also be liberating. So we must ask the hard questions. Hard as it may be to discover, truth is as vital a national resource as energy, clean air and water, and productive farmland. It’s worth the struggle to find and understand it.