The Right Way to Apologize When You Have Done Wrong 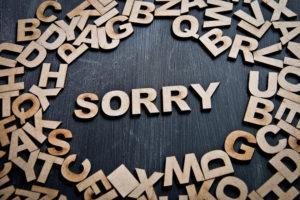 There is a right way and a wrong way to apologize.  A poorly executed apology can make a bad situation worse.

United Airlines is facing one of the worst PR disasters in corporate communications history—a textbook case of what not to do, with something approximating an appropriate apology coming only after United’s stock price plummeted and public outrage spiked to a fever pitch.

To recap, at the behest of the airline, airport security personnel forcibly removed a doctor from his seat after he refused to make way for United employees who needed to be in another city to crew another flight.  As security dragged him down the aisle, he hit his head repeatedly on armrests, winding up with a concussion, sinus damage, two broken teeth, and a bloody nose and lip.  All of it was captured on video, along with the gasps and remarks of other horrified passengers. Millions worldwide viewed the video and social media was ablaze with anger.

Immediately afterward, United CEO Oscar Munoz apologized—not to the doctor or the way the situation was handled, but for the “re-accommodation of customers.”   His tone-deaf response was baffling.  His apology was written through a “Prism of Me”—that is, what mattered to the airline, but not to its customers or the flying public.  A second apology two days later spoke more from the Prism of Value™, taking into account what mattered most to customers. Because this seemingly heartfelt apology came only after the company started to feel the pinch in the pocketbook, it might be too little too late.  United faces a lawsuit and a damaged reputation that will take years to repair.  Here are six rules for making an apology.

Ask yourself what harm was done by your action or inaction, and how you would feel if this happened to you.  Acknowledge those emotions, concerns, and frustrations. In the case of United, it was clear that the doctor sustained physical injuries as well as emotional ones. In addition, passengers on the flight were deeply upset and frightened.  The rest of the flying public is also concerned that something like this could happen to them.  Your responses should be framed through the Prism of Value™ to consider the sensibilities of your target audiences.

Express your concern and your own outrage at what happened.  But be sure you mean it.  In his second apology, Munoz said, “Like you, I continue to be disturbed by what happened on this flight and I deeply apologize to the customer forcibly removed and to all the customers aboard. No one should ever be mistreated this way.” His acknowledgment of concern makes it personal.

If you are the CEO or senior leader in your organization, as President Harry Truman famously said, “The buck stops here.” Even if you weren’t personally involved, it happened on your watch and you need to take responsibility for the actions of your team and company. Don’t pass the blame onto others. It looks weak, and it’s just plain wrong.

It is important to say that you are sorry that you let your customer down or that you didn’t live up to expectations or that you made a mistake. Communications and legal departments can (quickly!) iron out language that doesn’t admit liability. But an authentic version of “I’m sorry”—promptly expressed –makes you human.

Saying “Sorry” by itself is not sufficient.  You also have to demonstrate how you will make good on your mistake or what you will do to fix a problem. Pledge that you will find out what happened and that you will deal appropriately with the people who are directly responsible for the mistake.  If you made the mistake, let your stakeholders know what you are going to do to correct the error and make amends.  And then do it.  Follow up as appropriate to let your primary audiences know how progress is being made.

Don’t use corporate-speak or language that others may not understand.  United’s use of the term “re-accommodate” was like adding lighter fluid to an already raging wildfire.  Jargon makes it look as if you are hiding and that you are unfeeling. Speak directly and without embellishment to get your point across.

Making a mistake is not a pleasant experience for the person who made it or the person who is on the receiving end.  But apologizing with action can turn around a negative.  And remember, when someone makes a sincere apology, followed up by genuine efforts to repair the damage, be gracious in accepting it.