The Paper: A Communications Vehicle You Can Really Feel 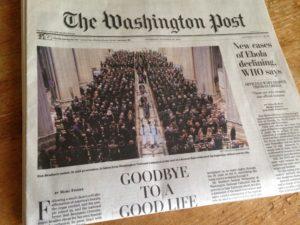 An extraordinary front page of last week’s Washington Post stopped me in my tracks and sent me back to the grocery store cash register to grab an actual paper. And I have the late Ben Bradlee to thank for it.

I grew up in the age of paper, a time when “the paper” meant a hallowed source and resource for everything I thirsted to know about, from the department store clothing sale to the news from overseas.  Because I at first toyed with, then became increasingly serious about, becoming a news reporter—preferably one who traveled to exotic locales to write even more exotic stories—I idolized men like Ben Bradlee and women like Katharine Graham. Sure, Peter Jennings was cute enough as a TV anchor, but Bradlee and Graham were giants to emulate—tough, forthright, historically wise, and rock-solid in their integrity.

“Goodbye to a Good Life”

At Wainger Group, we promote leadership communications–and Ben Bradlee was nothing if not the master. Although I was a little too young to relish the Watergate coverage as it was intended, as news of the day, we zealous young minds in the College of Journalism pored over every word on the revered archival pages we could find in the university library, blurring and (sadly) tearing them as we analyzed every sentence and imagined the day when the words we wrote might bring about such profound change. OK, so we probably knew we wouldn’t achieve Ben Bradlee’s stature, but we all wanted to work for him. In fact, we were pretty sure we would. (Even though I never had the privilege to work for the great man, I now work for Liz Wainger, who did.  And how cool is that?)

Today the world that Bradlee ruled is increasingly dominated by digital delivery (for better or worse, led by institutions like The Associated Press where eventually I came to work). Moment-by-moment updates erase the earlier edition; notably, the front page I so admired can’t be found today with the same content in an online search. The Post sends me my afternoon news summary in email, and that subtle joy in feeling the newspaper in my hands has receded to Sundays, when indulgence in the pulp and ink seems more fitting.

The Post, however, did itself proud and its justifiably splashy tribute to the man who might just be the world’s most famous editor speaks eloquently of the power that once rested in newsprint. Thank you, Mr. Bradlee, for reminding me that even in a digital world, a piece of paper can be a very fine communications vehicle indeed.