Don’t Let the Emoji Get the Best Of You 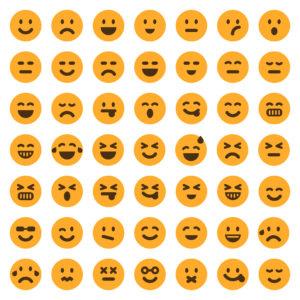 A few years ago, I heard an NPR story about a man who had translated Herman Melville’s Moby Dick into emoji.  It seemed yet another cruel assault on the English language and, for that matter, on language in general.

For thousands of years, we humans have been perfecting our means of expression.  Our communications built from pictograms and hieroglyphics became this marvelous and complex connective written language that birthed Dickens, Austen, Steinbeck, and Angelou. The written word opens the door into our minds and souls, allowing us to share feelings, ideas and inspiration. To be sure, it is not perfect—we all know about the failures to communicate. And that, in fact, is what makes the world of words so amazing. It is so very human.

Enter the emoji, whose utter simplicity threatens the richness and nuance of expression. Last year, to the horror of many British academics, four works of Shakespeare were translated into emoji and published by the well-respected Penguin Random House. The goal is a noble one, that is, to make Shakespeare accessible to a younger generation.  But what makes Romeo and Juliet so wonderful is the language itself, not just the drama of a good story. I have to admit that I chuckled at the emoji version, “YOLO Juliet.”  It does convey the underlying plot clearly but a lot seems lost in translation. Reading it would be like eating raw meat—basic and tough, but lacking the flavor and definition you get when it’s cooked.

So will these tiny symbols be the death knell of language as we know it?  Was the esteemed Oxford Dictionary wrong in declaring the emoji the ”it” word of 2015?  Despite my initial reaction of horror, the answer is no.  The emoji is part of a continuum of language. It’s not an “either or,” but a “yes and…” In the age of digital communication where we read on the small screen and are limited to 140 characters, we need shorthand. Emoji provide that. And if indeed, a picture is worth a thousand words, then a happy face can tell us in one character what it might take several words to convey. More importantly, emoji provide the tone of voice and physical gestures that email, Facebook, Twitter, and other digital platforms can’t always provide.  These little pictures provide a clarity that words on a screen by themselves cannot.

Language is constantly evolving.  I wonder whether the monks who spent hours illuminating the Bible were horrified when the printing press was invented. Was that a dumbing down of religious text? In fact, the first mechanical reproductions helped in the dissemination.  Just as, in a digital world, the emoji becomes an essential part of our discourse and emotional shorthand that telegraphs the feeling behind our words.  An all emoji world would be too simplistic.  But when used wisely and combined with the written word, emoji can enrich our communication.

How do you feel about emoji?  Please share your thoughts on emoji and how you use them.