The Amazing Superpower of a Great Metaphor 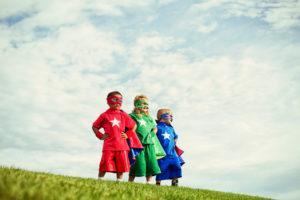 Some people view TED and TEDx events to be inspired, to learn and to connect with other seekers and skeptics.  This year’s TEDx Mid-Atlantic – with the theme of Superpowers – certainly had all of those components.  But as a communications professional who works with executives and their teams on how to be understood to drive value and positive change, I listened to the talks with a different ear.  In addition to the content, I also focused on how presenters get their point across.

Effective communication is a complex stew whose most important ingredients include a compelling message and the right delivery channels. It’s seasoned with constant listening and engagement with stakeholders about what matters to them, so communication remains meaningful and relevant.

In ways large and small, each of these communications aspects brings people together to make the world a better place.  They are effective because they use language in exciting ways to get a point across.  Communication IS superpowers.

In messaging training, we encourage participants to paint pictures with words.  Here is how some of the TEDx speakers did just that.

F.K. Day is president of the non-profit World Bicycle Relief, which works in developing countries where transportation is spotty at best.  When talking about how a bike had transformed the work of an HIV/AIDS health worker, he described it as “turbo-charging an angel.”   We quickly understood the kindness and dedication of this woman and the transformative power of her new bike.

Psychiatrist and Professor Mindy Fullilove talked about the “ecology of inequality,” to further her point that great disparities between rich and poor, between health and illness, are not isolated to one group or another, but are part of a broader system.

When Democratic Senator Tim Kaine of Virginia said, “Our country is living through a stress test of our constitutional democracy,” I saw a tired person running hard with electrodes plugged into their chest.

When photographer and writer Amanda Rivkin spoke about the Russian manipulation of social media, she used a clever rhyming phrase to point out that social media doesn’t so much compel us “to share, as to compare.”

My favorite was Jordan Randall Smith, who talked about people viewing classical music as “audio broccoli.” “Take two Mozarts,” he said, “and you will create the next Facebook.”  He could have said that classical music is something you should listen to because it’s good for your brain, but instead used “audio broccoli” to conjure up imagery that sticks.

As these speakers demonstrated, a good metaphor or analogy goes a long way toward creating effective communication.  It’s key to the spread of ideas.  In keeping with the mission of TEDx, those ideas must be “worth spreading.”  At TEDx Mid-Atlantic, enhanced by some superpower wordplay, they were.