A Friendship That Survives Despite War and The Passage of Time

When you haven’t been in touch with someone for a long time, it’s easy to think that perhaps that person is gone forever. But as I recently learned, it might not be too late.

A few weeks ago, while cleaning out a closet, I found two letters in an old purse from my friend, Snjezana. We met in a youth hostel while I was backpacking across Europe for nine months in the 1980s.

The letters were incredibly powerful, talking about her life, plans, dreams. We had had so much in common. And it made me incredibly sad that we had lost touch.

Snjezana is from Croatia and our connection had ended when war—another war decades ago—broke out and her town was particularly hard hit.

Now, as another war rages, I found myself wondering about her. Was she safe? Was she OK?  I had visited her family, and met her parents and her sister, who were so warm and welcoming. They had to be OK, right?  She had even come to U.S. and visited with my family and friends. Our friendship came at inflection points in both our lives.

I had written to her, but never heard back—not uncommon in pre-internet days when paper letters had to travel across thousands of miles. But why hadn’t I tried even harder to stay connected?

Then, one Sunday morning, I Googled her. In seconds, I found her on LinkedIn.

With great trepidation, I reached out.  Would she remember me? Would she be open to reconnecting after several decades?

And the answer, thankfully, was yes.

A few days later, we got on Zoom and it was as if no time had passed. I can’t describe the joy in finding my friend and catching up. She now lives in Australia, has a family of her own, and is joining me in making plans to meet somewhere in the next year or so.

During the height of the pandemic and even now, I reduced or stopped the events I attended for business. I am not connecting with people the way I did pre-COVID. I share the feelings I hear about from many of my clients and friends who talk about the sadness of disconnection. That doesn’t mean, however, that you can’t maintain, rekindle, or even start friendships.

All is not lost.  It requires some bravery and lots of intention.  And it is so worthwhile. 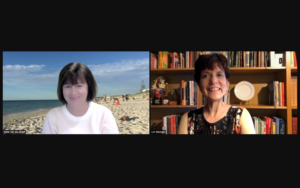