6 Ways to Talk Your Way Through Conflict 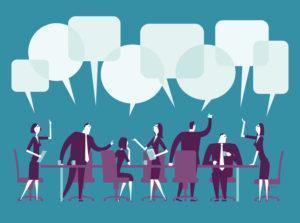 Turn on any newscast and you have an opportunity to learn how to deal with conflict.  Nothing feels more pressure-filled than being interviewed by a reporter on live television. There are no opportunities for do-overs, and what you say or how you present yourself is on view for millions.  You might feel the same, high stakes pressure when making a presentation to a potential investor, sharing your new strategy with your management committee or even sitting down for a meeting with your boss.  You may be feeling at a loss for how to respond to the tough question you weren’t expecting.

Seasoned politicians and corporate executives invest heavily in media training so they can deliver their messages clearly. Their (mostly) calm, unflappable demeanor comes after intensive preparation and practice.  Those clever quips and comebacks are carefully crafted in advance so they can roll off the tongue at just the right time.

During the 1988 Vice-presidential debate between Senators Dan Quayle and Lloyd Bentsen, the latter delivered a devastating sound bite.  Bentsen was nervous about the debate.  He was not telegenic and the much younger Quayle was. In fact, he wanted to call the whole thing off.  Instead, he and his team prepared. They knew that Quayle, in defending against his relative youth, had frequently compared himself to President Jack Kennedy. Bentsen was ready.  So when Quayle started to talk about Jack Kennedy, Bentsen quickly shot back, “I knew Jack Kennedy. Jack Kennedy was a friend of mine. Senator, you’re no Jack Kennedy.”   With that remark, Bentsen won the debate and created a sound bite heard round the world.

What he did with that simple sound bite was reframe the conversation.  By understanding some basic tenets of talking through conflict, you, too, can learn to manage hot situations on the fly, whether it’s with a colleague, a client, or a dogged reporter.

Don’t Repeat a Negative – Reframe it.

A PR colleague once told me about a reporter who asked if he trained corporate executives to lie.  His answer was, “No, I teach them how to tell the truth.”  When asked a negative question, most people repeat the negative before denying it—as in, “No, I don’t teach people how to lie.”  But when you repeat the negative frame, you reinforce it.  Let’s take another example. Say you are late for a meeting and your boss says, “Well Ms. Smith, you’re late once again.”  You might say, “I’m sorry.” Instead, you could say, “There was a problem on my bus route. I will have to find a better way to get to work.”  You’ve acknowledged the concern but redirected the attention away from your transgression onto positive action to correct the problem. (And you’d better find that speedier bus route.)

Every day we are asked questions we don’t want (or perhaps aren’t able) to answer. Colleagues may ask about strategy or personnel moves you may be planning, but aren’t ready to announce.  Your boss may ask for information you don’t have and can’t get. Just because a question is asked, however, does not mean you have to answer it.  One of the best ways to tell people that you don’t want to comment or talk about something is simply to say, “I don’t have any information or an opinion on that I can share right now. When I do, I’ll let you know.”  Then go back to what you want to address. Let’s say you were up for a promotion and didn’t get it.  Dianne in Purchasing sees you in the break room and says,” Gosh you must be disappointed—you know, about that promotion.” You could say, “Yes, I am.” Or you might smile, instead, and say,” You win some and you lose some.”  One caveat—if your boss is asking about the whereabouts of a report, you’d better answer it.  If however, she asks about your sick father and you don’t want to get into it, you can simply say, “Doing as well as can be expected. Thanks for asking.”

Bridges are Your Friend

Another way to deal with difficult questions is to use the question as a bridge to what you can and want to communicate. Imagine you are making a presentation to the management committee about your research on venues for your firm’s annual meeting. In the middle of your presentation, the COO asks what you think about the company’s new cost-cutting measures. You weren’t expecting that and you don’t want to answer in that setting because you disagree with the move. You could say, “That’s a great question because one of the factors we looked at in venue selection was cost.  Let me share with you our recommendations.” In this way, you acknowledge the question and use it to find a way back to your main message.

There is a standing old joke in the PR business:

Journalist: “How many PR folks does it take to change a light bulb?”

Don’t be afraid to say you don’t know something. Nothing is worse than making something up or lying.  In the end, lies tend to be revealed, and as they say, the cover-up is often worse that the original deed.  If you are in a situation where you should know something but don’t, acknowledge that and then tell the person you will get the answer for them.  In the case of the COO pressing you for your thoughts on the new cost cutting policy, you could say that you haven’t fully processed its implications and would like to get back to her on that.

When asked a tough question or one that you weren’t prepared for, try to maintain a neutral demeanor.  If you feel off balance, take a breath and say something like, “That’s an interesting question.” You can also ask your associate-turned-interrogator to repeat the question. Or you can ask one yourself, as in, “I’m curious, why do you ask?” or “It’s an important question, what are you hearing from others?”  All of these will give you some time to think about your response.

One of the most difficult things to do when faced with hostile or difficult questions is to hold your ground and resist being rattled.  Look your questioner in the eye (if you are uncomfortable doing so, look at their eyebrows or forehead), pause and frame your response. Avoid looking up or down, or using lots of ums and ahs, as this will project a lack of confidence that could even be read as shiftiness.

Talking through conflict is an integral aspect of communicating well. By keeping your cool and falling back on a few simple techniques, you maintain control—even under the most unexpected or fraught circumstances.  What are some of the ways you navigate through tough situations? Please let me know.

Liz Wainger is a communications expert who works with executives and their teams to frame and deliver messages that win.  This post is excerpted from her new book, The Prism of Value: Connect, Convince and Influence When It Matters Most, due out later this year.