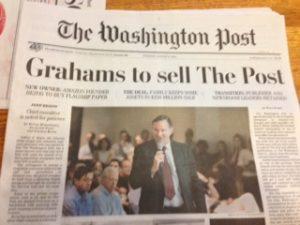 In the movie Avalon, the father character Sam Krichinsky, remarks wistfully, “If I knew things would no longer be, I would have tried to remember better.”  I’m sort of feeling as Sam did today when I learned about the sale of The Washington Post to Amazon founder Jeff Bezos.  We mourn for what was while moving forward to the future.

My first job in Washington was as a temp in the advertising department at The Post and through a strange and wonderful journey ended up reporting for the paper on its Metro and Style desks, garnering two front page stories.  It was one of the best experiences of my life–working with some of the most talented journalists in the business and getting a view of Washington that most people only get to read about.  The four years I spent there in various jobs there was like getting a Masters degree in journalism.  It was an exciting place to be, crackling with possibility.

During the 1980s, I remember the biggest competitive threat wasn’t The New York Times but television which vied for readers’ attention.  No one could have predicted or imagined the Internet at that time.

Unfortunately for The Post, they weren’t able to keep pace with the profound changes in communications and the way we now access and share information.  For years, I have steadfastly held on to my print subscription because I wanted to support the paper.  A few weeks ago, I decided to drop it and go digital; let me say that The Post isn’t making it easy for me to do this.

The sale to Bezos is a good thing and I commend Katharine Weymouth and Don Graham for their courage in making this move.  But it yet another reminder of how much things are changing and how the world that I grew up in is slipping away to make room for a different one.  That is change and we better embrace it.

The lesson in all of this is something Bezos himself said in a interview a few years ago: “If you want to ensure your extinction, cease to evolve.”